I have been following Peter Puklus‘ work for quite a while now, through both his books and direct encounters. I remember I attended a talk Peter gave in Amsterdam two years ago, and it was easily one of the best presentations I have ever heard a photographer give. Last year, Peter published The Epic Love Story of a Warrior, a photobook that is not just that, epic. It also is tremendously ambitious and political. Start deciphering what merely look like studio still lifes or nudes, and you see Europe’s tattered and complicated history unfold, a history to which another complex chapter is being added right before our eyes, with neofascism rising everywhere.  This seemed like a good time to speak with Peter about his work. The following conversation was conducted via email.

Jörg Colberg: Can you talk about your background as a photographer? You’re based in Budapest where you also went to (photography) school?

Peter Puklus: My relation to photography started quite early: I was about 10-12 years old when my family went to an excursion to climb the Schneeberg mountain in Austria. The day before I discovered my father’s East-German Exa camera. Somehow, I managed to open the back and I pulled out the entire film. I remember I proudly showed it to him. Then he explained how the camera worked and gave me a new roll. On the next day, I photographed the cows with green grass and blue sky. A little later I started to buy my own films and develop them in the bathroom…

Towards the end of high-school (when you have to choose which university to pick for your studies) my sister mentioned that there was a photography program at the University of Applied Arts where she studied architecture (today it’s called Moholy-Nagy University of Art and Design, Budapest – MOME). I failed at the first entry exam so I filled up my year with preparation for the next year’s attempt, plus I had to make some money: first I worked in a printing house. I was mostly helping in the book-binding area. Then I started working as a junior graphic designer in a small design studio where I usually had to create flyers and menus for the local restaurants. The next year, in 2000, I got accepted to MOME, to the Visual Communication / Photography Department.

I graduated in 2005, my final degree work is the base of my first book One and a half meter. The same year, with a scholarship of the French Government I went to Paris where I studied in a Masters in New Media Design course at the École Nationale Supérieure de Création Industrielle. This is where that thing with ‘leaving the square’ started, and I worked with video, drawings and objects. In 2007, I went back to MOME where I continued my studies – at the doctoral level. But defending my thesis still lies ahead.

JC: Can you speak more about ‘leaving the square’? How did this start, and what do you gain by doing it?

PP: Even though I really respect the ‘square on the white wall or page’ stage of the medium I believe there is much more when we talk about photography. Technically it’s a frozen moment. But I’m also in interested what happens before or after (in time) or in front or beyond (in space). I am about to discover these territories for instance by visiting and using different platforms and medias. I believe photography is not only a medium, it’s more like a tool – a tool to help you formulate your message. And this is what matters first and foremost: what would you like to say – and then you select the most appropriate tool(s): the how(s). During my practice I would like to create a multi-layered, complex building, and you cannot construct a house with one hammer only. 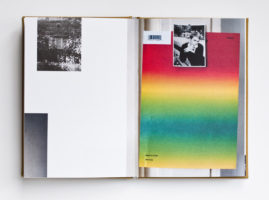 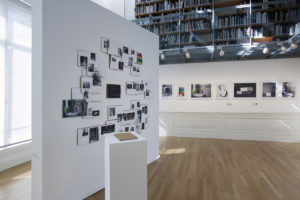 JC: Photobooks have played a major role in your practice. Before we look at them in more detail, can you describe what it is that the form of the book has to offer for you as a photographer?

PP: Books are playing a major role in my life: growing up in a house full of books, reading those teenage novels till dawn, learning how they were made, and now trying to design the perfect book-shelf for my collection in the new house where we are just about to move in… I believe the book (including photobooks) is a very democratic platform: you don’t need electricity, internet and a screen to access them. And they smell great!

When I make a book I know that my decisions are definitive (this happens quite rarely otherwise in my life), and it’s a great feeling to discover the mistakes later. On a more practical level: there are certain moments when you have to decide to finish a project. And when you are holding your freshly published book in your hands, you know that it is really at that moment that you can focus on your next idea.

It is also a tool: it works great as a “portfolio” (I don’t like this term) as well as a present for contributors, curators and collectors, etc. In three words: compiling, closing, sharing.

But maybe most importantly: photobooks are part of the project. They tell stories not only through the sequence of the included images but through their physical form and appearance as well. Also, they remain with us.

JC: Your first book, One and a half meter, was still a pretty conventional affair. Handbook to the Stars then ended up an installation in photobook form. And now The Epic Love Story of a Warrior takes things even further. I’m wondering about this evolution. Let’s maybe start with Handbook – how did this book end up being what it is, pushing the form of the book beyond what it usually is?

PP: To be honest, the idea of the installation wasn’t really there until I received the boxes from the printing house. I knew it was possible to recreate that ‘map,’ which is folded inside the book, by placing several books next and on top of each other, but I couldn’t really focus on that part of the project because I was busy with the production. The installation itself is almost an accident – however, it was coded by design.

From the beginning of the book-making process I was thinking about something ‘different’. I wanted to tell a story. The story of the endless capacity of human mind, how we are able to connect unrelated things together just because we want to understand our universe. The book has no single topic or theme: it contains still-lifes, city-scapes, portraits, interiors, nudes, etc. and it is up to your imagination how you connect them or which connection you follow. Finally, with the book installation I am proposing a solution, but it is not the only one.

JC: Love Story, your newest book, yet again pushes the boundaries of the medium. It might be best to start out by talking what it actually is. What’s going on in the book? Where did the idea of doing a historical novel (of sorts) in photobook form come from?

PP: To be able to see the background of Love Story, first I have to talk a little more about the two other books. I was working on One and a half meter between 2004 and 2009 and on Handbook between 2009 and 2011. Then both book were published in 2012. When I held the two books in my hands I felt like there was a big gap between them: One and a half meter was about intimacy, friendship and family (the ‘diary of a young photographer’ as I call it today); Handbook was about creation, construction, fabrication, with very little personal references.

Somehow, I wanted to fill this gap and connect the books, and this is when the idea of making up and design a family story came. The recipe is quiet simple: I took memories, events, characters and places from both of my wife’s family (she’s coming from a Jewish background) and my family (I’m coming from a catholic/protestant family). I put all these elements into a so called ‘inspiration bucket’, mixed it well and finally pulled out a few very arbitrarily (I love this word). These elements were the basis of the project. Then I rearranged and reconnected them with many different other things. This approach generated a ‘fake’ family story based on truth. The one-liner of Love Story sounds like this: ‘The story of an imaginary family in Central Europe during the Twentieth Century’.

JC: There is a large number of visual references played out in Love Story. How did you conceptualize these? And aren’t you worried many people might simply not get them?

PP: Usually I don’t hold the viewers’ hand through the exhibition or the book. I realize it might cause some people losing interest at the beginning. But those who are willing to spend time with my projects to see what’s between the lines engage more. The “target area” of Love Story is the EU and US (somebody called it WASP, but I think it’s pretty offensive). However, it’s true that these people more or less share the same culture. Even the different countries are connected through history, economics, or at the personal level. We are used to watching more or less the same movies, we read the same books, worry about the same news.

Long story short: there is a commonly shared large number of visual references you can connect to. I am playing with these references through the book, and I’m sure that there are always a few images which make a random viewer think of something. Maybe that’s when the engine starts working.

JC: With its larger theme of European history, do you see the book as a commentary for our increasingly times?

PP: I am also worried about the recent news, the terrible changes in our society and the bloody Russia–Brexit–Trump triangle. Somehow this feeling leaked or filtered into the project when I was working on it. I believe that there is a hidden message somewhere in the book: we are still living in the 20th century, which started around 1916-1918 with, during or after the WW1. Since then the rules of our times have been more or less constantly the same. And the history of our time is repeatedly told and taught in the same way: a vertical opposition between good and bad, left and right, blue and red.

I believe that the real 21st century will arrive when people realize that the real confrontation is between up and down: the oppressing power (state, bank, corporation, etc.) against us, the people. I really hope that we can make this change happen without a major war.

JC: So do you see yourself and/or the book, Love Story, as activist, given your beliefs appear to be quite strong? Or is the artist’s role more reduced, to maybe make people look, but what they then do is beyond your powers?

PP: Looking, seeing, understanding. In business when you introduce a new product or service to the market, you have a chance to become successful if you can answer to all of the following items: define the problem, propose a solution, call to action. The tasks of the practicing contemporary artist are pretty similar (except we use different terms), and I’m not sure which one is more difficult or complicated. Since I really hate it when somebody wants to tell me what to do and how to do it, in exchange I usually try to keep my strong opinions to myself. However, I like the role of the activist in terms of asking (sometimes disturbing) questions and suggesting (sometimes uncomfortable) ideas.