Alvaro Deprit is one of the four winners of the 2015 Conscientious Portfolio Competition, with Al-Andalus, a playful project that appears to contain hints of magical realism. I spoke with the photographer about his general background and about Al-Andalus.

Jörg Colberg: Can you talk about your background? Who are you as a photographer, what are your main interests and/or motivations?

Alvaro Deprit: I am from Madrid. I was born in a large family whose origins are partly from the North, partly from the South of Spain. I studied at the Italian College of Madrid. Ever since, my education has been exposed to different cultures. Later, I decided to study German Philology and Sociology at the university.

I always had a strong interest in cinema, but at the time I didn’t have the means to undertake that kind of study in Spain. In spite of this, I strongly nurtured my fascination for images and my strong connection with cinema and photography.

At the age of 25 I left Spain and travelled through Europe both for studies and for my job, ending up to Italy where I settled down and where I started to work as a professional photographer.

I used to approach photography as a self-taught photographer. What is important to me as a photographer is not so much the plot or the sequence of events (they work as a frame). I try to catch what is underneath, the colours and the mood which surround every story.

JC: Al-Andalus mixes aspects of Spain’s background, the recent economic crisis, and your own personal history. How did you get interested in exploring this photographically?

AD: The aim of Al-Andalus is to give a shape to emotions, feelings, memories, nostalgia I have from family tales and photos about Andalusia. I did not live there. I do not have a direct experience of that place, but it is the place where my family comes from.

In line with my approach, this project has no well-defined plot, It wants to show pieces of life and images of reality in order to express emotions and feelings related to my personal life. Al-Andalus can be considered a search for my imaginary childhood as it is depicted in my mind, through the tangible experience of that space. It is important to stress that my representation of this place cannot disregard the contemporary, historical, and social context. This interaction between personal and social representation produced an interesting contradiction between my mental construction of this place and the real place itself.

Andalusia is the result of a complex cultural stratification, derived from the passage of different civilisations which, over time, gave life to a hybrid identity capable of containing within it the stereotypical traits of Spanish culture.

Andalusia is the fusion of the rational and irrational. ‘Duende,’ a word that means fairy or pixie, belongs to the Andalusian tradition. A ‘Duende’ is a mythological creature, an inhabitant of a house who uses to create confusion and disorder, changing things around. It is also a mysterious enchantment associated with flamenco and to an evil existence. I did not try to explain the history of Andalusia. Mystery and fragmentation, together with a closeness to the land: that is Andalusia as a desire in itself, which provoked in me the need to explore. 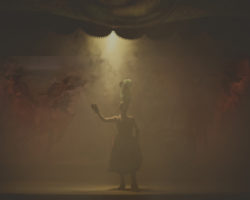 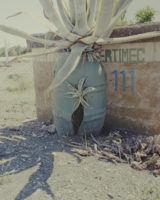 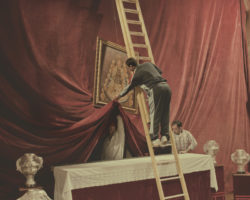 JC: How did you go about producing the photographs for Al-Andalus? Did you use the well-trodden road-trip tradition, or was there a different approach?

AD: So far, I have been working on Al-Andalus for four years. I did not have a travel plan, but only particular places which I have been reflecting on for a while and where I spent a period of my life. I choose these places mainly because, as I said before, they were a part of Andalusia where my family come from, and also because they represent the ‘fabulous scenario’ of my childhood memories.

The first step before I leave for a place I am working on is to know about its geographical features, its historical, social and cultural background. When I arrive at a place I don’t like to follow any kind of method or theoretical structure, but I feel like the flâneur. I do not look for something in particular, but walking through it I am open to be overcome by the space itself. It is through an absolute experience of places and through encounters with people and their tales that I can perceive changes and myself as a part of them.

JC: Can you talk in more detail about photographing for Al-Andalus? Do older pictures inform newer ones? Given you have worked on the project for four years, how did the process of editing, shaping the work evolve?

AD: The older pictures I used for my project represent my Andalusian family. I went through them so many times, especially the one I choose to open my work with. It depicts my great-grandfather (in the center, without his hat while he is hugging his dog), my grandmother and her family. Clothes, boots, hats, whatever I could see in those pictures carried me away, across the ocean. It seemed to me to be taken to somewhere in the Western United States or in Mexico. Also, the age of those photos, their state of decay, their vague and warm colour contributed to this mental trip. Therefore these older pictures are the starting point for my fantasies, consequently for my memories and, not least, for my research. Integrating the older pictures into the process of editing created a sort of “spiazzamento” (break): the older pictures, as a symbol of tangible reality, in opposition to my photographic vision produced a fictional atmosphere.

After two years of taking photos I started editing them. This is the most important stage in my work. As the syntax for language, editing can be considered as an unformed puzzle that needs to be accurately and coherently organised. Editing does not mean just choosing and organising pictures in order to give them a coherent shape, it involves emotions and feelings. There was a strong emotional involvement in editing Al-Andalus, which created a stream of consciousness, impressions and feelings. This emotional state is not necessarily caused by something reasonable, and it is the mood through which I tried to explain what I was feeling. I found philology very useful to understand these feelings, given that our thoughts express themselves through language. 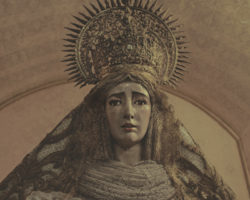 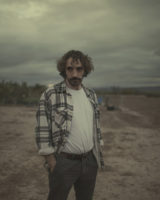 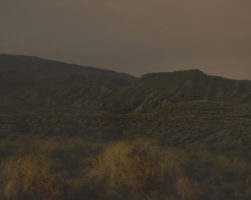 JC: You have also produced a couple of photobooks. What role do books play for you and your practice?

AD: I think photobooks have a central role in the production of photographers today: they are an adequate tool for displaying photography, reaching a wider audience, but not in an ephemeral way.

Probably my strong connection to them is due to my former practice in the editorial world. I like my pictures printed. Moreover, I like the material quality that photography gets when it is printed in a book.

Last but not least I experience photobooks in a sort of collaborative sense: for both my publications I had the opportunity to collaborate with other professional figures. For Suspension I worked with Dutch studio Koehorst in ‘t Veld. They were able to help me to shape my project in an object with more content than just my pictures, adding other elements I also collected during my research. There are some drawings in the book from the guys I portrayed.

In the case of Dreaming Leone, I worked with with my peer and colleague Michela Palermo. We designed an object rooted for sure in my documentary work of the Tabernas desert. But we were able to nod to a more complex visual culture: the book is also an homage to the cinema tradition of Spaghetti Westerns.

I think these experiences enhanced my photographic production. They gave me the opportunity to see my work through other perspectives, empowering my awareness of the photographic language.