Bahar Habibi was one of the winners of last year’s Conscientious Portfolio Competition, having submitted Whispers will become eternal. Juror Ann-Christin Bertrand wrote about the work “This wasn’t an easy decision to make. While going through the series several times, I realised that the series by Bahar Habibi was the one I stopped to look at the most. For me, this portrait of  a country and its people seems particularly successful. The project combines sensible portraits and landscapes, but also sometimes slightly absurd seeming situations, using in a well-thought-out aesthetic in every image. Content and form join together very well.” Over the past months, I conducted an interview with the artist who had just moved back to Iran.

Jörg Colberg: Can you talk a little bit about your biography? You were born in Tehran, Iran, but now you live in Vancouver?

Bahar Habibi: I was born in Tehran at the beginning of the 1990s. My mother is from a region in the centre, my father from an area near the Caspian sea. I grew up in a middle class, secular family in Tehran until we immigrated to Vancouver in 2007, where I did my undergrad at Emily Carr University of Art. In 2010 I did an exchange semester in the UK, which was an entirely different and rewarding experience. Whereas the photo department at ECU is to some degree still under the influence of Vancouver Conceptualism, the school in the UK was much more focused on hard core documentary. I think my work is in some ways a cohabitation of these two extremes.

How I ended up on the Canadian West Coast was mainly due to a decision made by my parents, who, like many others, took the family abroad for the prospect of a better life. Right now I am living and working back in Tehran.

JC: Whispers will become eternal contains photographs you have been taking while visiting Iran. At what stage did you realize that you wanted to create a body of work around images taken there?

BH: I made my first visit back to Iran two years ago while on exchange in the UK. It was a very intense trip, full of emotions and discoveries. I had not anticipated the start of a big body of work. It just sort of came about. I had my camera everywhere I went, and slowly realized that the process of having a camera and making photographs was a brilliant way to be here again, to interact and start having conversations. It was making me understand the context I was in, as an outsider. An outsider with lots of memories, and friends, and familiarities. Thomas Roma put it beautifully saying that photography is an excuse to be in the world -not just looking-, it is being in the world. Photography keeps me engaged, alert, and always curious.

Socially and politically, Iran has been very isolated in the last thirty years. Outside of Iran people know very little about how things are here, and how things and streets look; how people look. This was another motif for making photographs. I want to create an archive that is telling of some kind of history intertwined with emotion and my own state of mind. 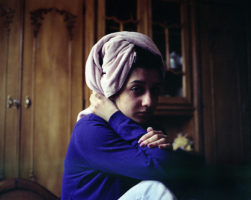 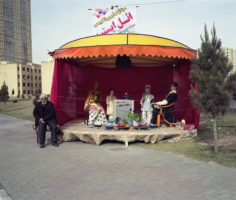 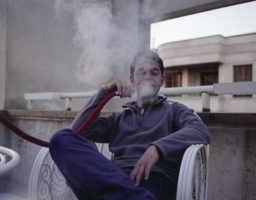 JC: Was your decision to move back based on your experiences and your photography? Are you planning on using photography to (re-)discover Iran, or was the photo aspect secondary?

BH: I would have to say both. Everything kind of went hand in hand. I had been thinking about moving back for a couple of years. I wanted to experience living here again and photograph at the same time. I can’t separate these two from one another. In my work, I try to examine the systems that underpin my daily life such as everyday objects, routines, events and experiences, and the relationship they form to a larger social context. Based on this, the process of living and thinking and being in the end constitutes the photographs. I understood that in order to make the archive that I want to make, I needed to live here for an extended period, rather than visit shortly.

BH: It is pretty much not pre-planned at all. The way I approach photography, regardless of where I am, is to be open to what comes my way and take note. In Iran there are some limitations to where you can have a camera. But for the most part, I have my camera on me everywhere and photograph spontaneously. Whispers will become Eternal is about the spaces between belonging and alienation, history and self presentation, exoticism and everydayness. For me photography is similar to catching someone quietly whispering; it is hovering in space, and then it is gone. Making a single frame in any given space is like eternalizing a whisper, a point in time, without beginning or end.

I still shoot with analogue mediums, with film and Polaroid, because there is a sense of tactility and craftsmanship. I like the intuitive process and the need to wait for processed film. Chance plays an important role in all of this as well. Photography has always had a delicious element of mystery for me, which I think is also what fuels my process. The technology of the camera that I use to a certain degree dictates the kind of photographs I make. It stills time and lends itself to a much slower process, which I think is visible in the work. Sometimes I see something and either don’t photograph it or photograph it with my phone and later go back to the scene with my camera and wait for something to happen. 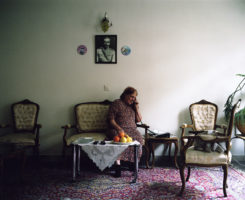 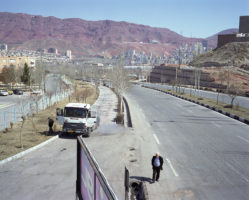 JC: Can you talk a little bit more about the role of mystery and what excites you about this?

BH: The mystery I am referring to is the accidents that happen while photographing. In the micro instant between the decision to make a frame and when the shutter is pressed the whole scene can change and once in a while you get something wonderful and magical. Mystery is what you can’t plan. It is these lucky collisions into a moment that make life worth living.

Accidents can also take shape on the material itself. Film and analogue mediums lend themselves to the possibility of something more. In the image, ‘Sepideh, (Cafe en route Alborz Mountain)’ [top image], there is a bright yellow light leak but it adds to and compliments the gaze of the girl in the image. These unplanned occurrences are what excite me about photography. I have another ongoing project solely based on light leaks.

JC: Given you’ve been living outside of Iran as an expatriate, have you noticed your feelings and ideas of Iran change? And if so, has this had an effect on how you see and photograph Iran?

BH: This is a hard question. How do people’s perceptions of their own culture manifest in general? The paradoxes that I feel exist within my culture complicates my relationship to it. And I suppose this is a common way to feel about Iran for a lot of people. The revolution has left so many bitter.

I would say my feelings and ideas have greatly changed, partly because I have changed and partly because I was away for many years. Nostalgia is something that I try to get away from in my work, but it is a by-product of migration, whether I like it or not. I cannot help but embrace aspects of life in Iran that cannot be found in other places, where at the same time, the same things might frustrate someone who lives here permanently. In relation to how this affects the way I photograph, I think my experiences allow for a kind of separation from the city that lets me see more clearly. When you live far from a place of origin, your ideas of what constitutes ‘normalities’ start to shift. I think, when I am back in Iran, certain things that might be overlooked because they are considered normal and familiar, attract my attention. Ideologies start to show themselves in a more obvious way, rather than being engrossed within the fabric of everyday life.