These days, it’s hard to come up with something that unites us in our fractured, ever more decaying societies that are slowly eaten up by a mix of corporate greed, political cynicism, and internal rot. The only things that still stand above the fray are celestial bodies, most of them too far away for us to be able to despoil them as well. Stars, planets, and moons continue to shine their light on us, however pathetic a scene we produce down here, and we revere them for the beauty of their spectacle, for their astronomical sublime.

The night sky never fails to produce a sense of recurring beauty that even the greatest pieces of art have a hard time mustering. For example, the moon is always the same moon, always showing us the same side. It’s so familiar, yet it’s also so amazing to see in its many variations, which rage from the slight, tender sickle to the glaringly bright full moon that will illuminate an otherwise dark night oh-so brilliantly. 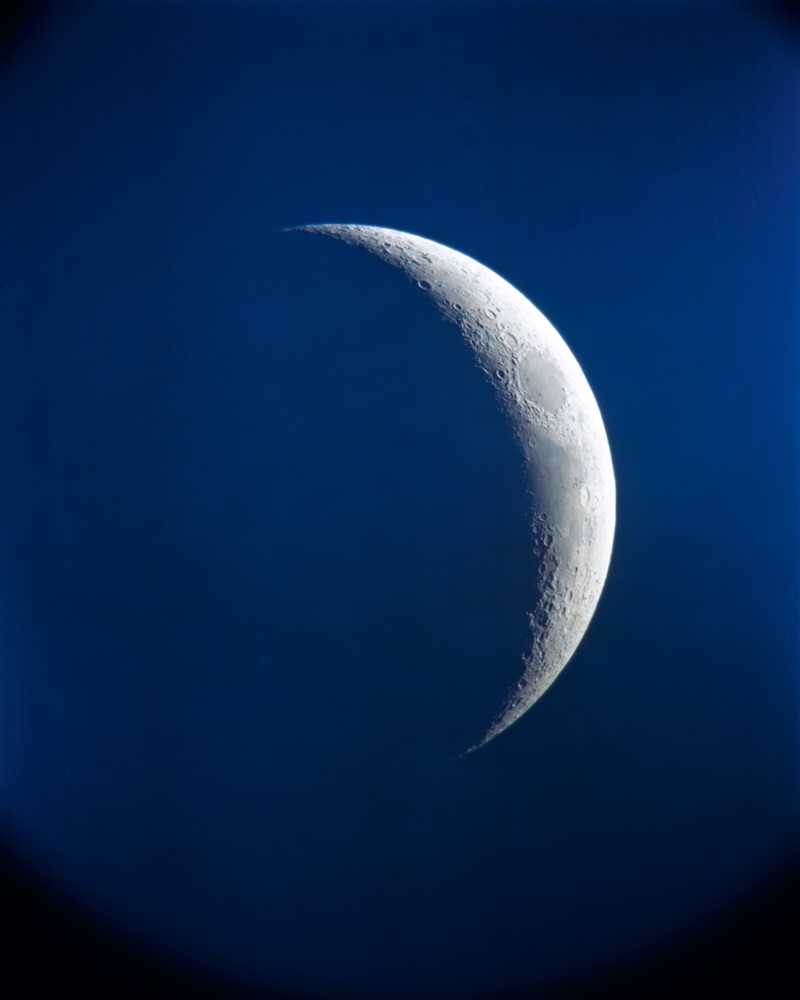 Given most celestial objects are too far away for us to visit, the history of astronomy is almost synonymous with a very particular history of photography, and, if we go back a little further in time, with people making art by sketching or drawing. We study these objects almost exclusively through the light they send us (where said light extends into domains invisible to the human eye). And if we are not among those who academically study them, we appreciate them in much the same way, through what their light has to offer.

I’ve mostly stayed away from looking at artistic attempts to deal with astronomy because of my background. I studied physics with a focus on astronomy. I spent years writing a Ph.D. thesis on (theoretical) astrophysics and then a few more years attempting to carve out a career in the field before aborting it. What has had me stay away from artists approaching astronomy is not so much that by training I know a lot about the topic, though. Instead, it is that artists often attempt to be or act like astronomers, and that simply doesn’t work for me. I once had Thomas Ruff explain to me what he thought astronomers weren’t getting about images, and I ended up thinking “If you only knew…”.

What can happen when an artist approaches the stars with a true artistic sensibility is demonstrated by Barbara Bosworth‘s The Heavens. To be honest, as much as I appreciate the fact that she produced the images with an 8×10 camera and the various technical contraptions needed to be able to make them, that’s not what has me interested. Instead, it’s the fact that their staggering beauty derives from the fact that they were made so a viewer can feel them, instead of merely see them. 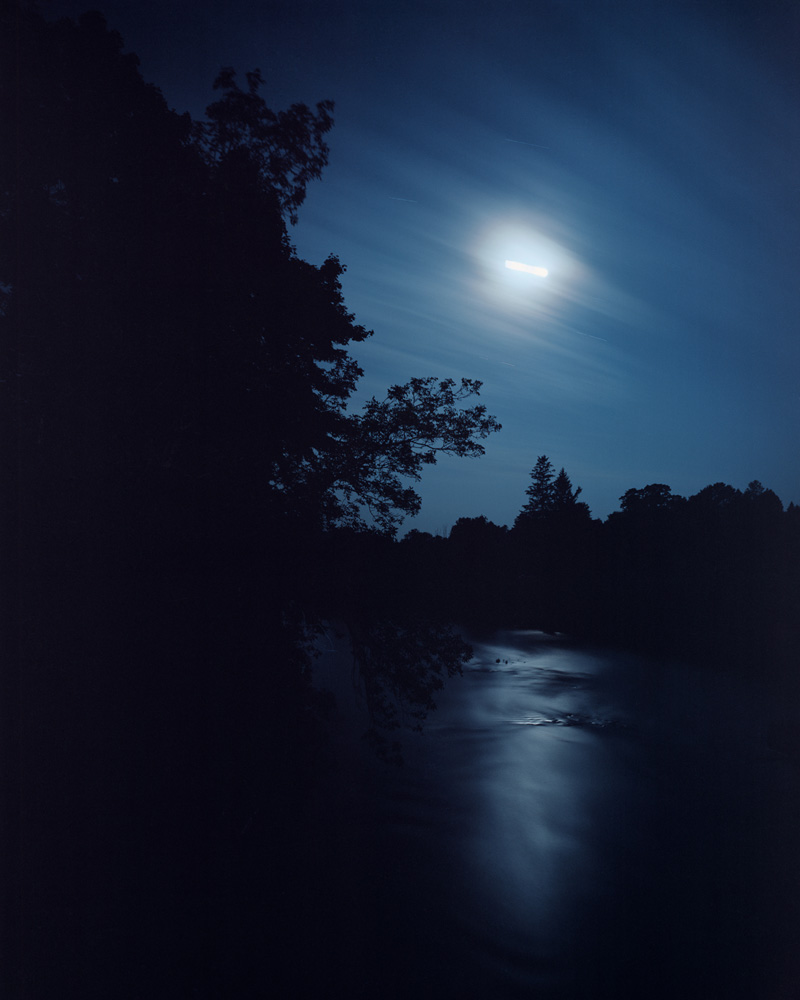 In a strictly astronomical sense (which is also adopted by the sprawling community of astrophotography), many of the pictures are flawed. They’re not quite crisp enough, or they might be a little bit uneven or blurry. But that is exactly why they’re so great: they perfectly express the experience of someone who knows full well how to make a beautiful photograph, someone who knows how to let the experience of feeling a landscape drive that process.

In one of my favourite photographs (on page 27 in the book), the frame is taken up by a sea of darkness. The sky really only occupies roughly the image’s upper third, allowing the viewer to see that Bosworth pointed her camera at a group of trees, which can be made out against the sky. There is what must be a full moon, brightly illuminated, but somehow also losing its struggle to provide light. What might have been a relatively bright light is turned into something altogether different through the tool of photography. A few clouds are visible above the moon, and a handful of other specks of light might be some of the brightest planets or stars.

A confident astrophotographer with their expensive tools would have turned the scene into the well-known image of a sky filled with stars and a moon whose details would have stood out sharply. But that’s not what I am led to think Bosworth was after. Instead, she wants to convey the sheer wonder of being in the presence of such a moon under an almost spotless sky at night when we all feel the presence of something much larger, a world of which we are only small and irrelevant parts.

This idea permeates through the book, with its countless photographs of stars, the sun, and the moon. It is that astronomical sublime that re-emerges time and time again, either with its specks of light against seas of darkness, with its delineations of landscape, or with what almost are portraits, images of the sun and moon that surprise and delight the viewer through the fact that these two are granted a character (I don’t know how else to describe it). 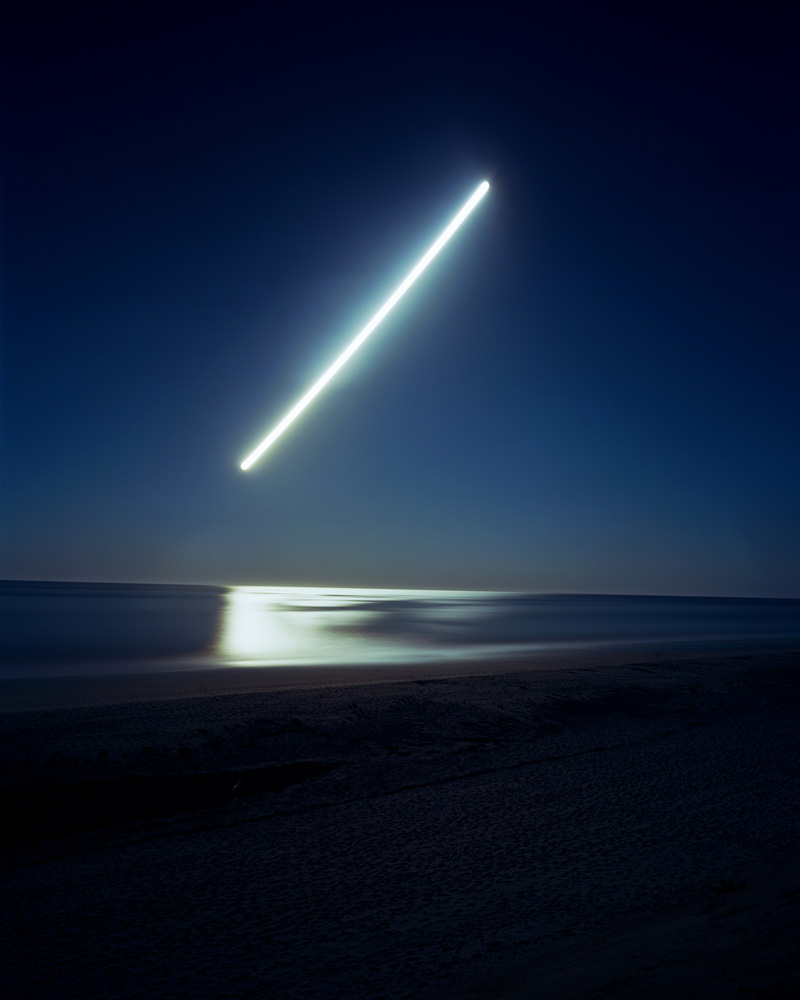 In addition to these photographs, The Heavens features reproductions of three booklets made by the artist, each with a different theme (“The Moon”, “The Heavens”, “The Sun”). Using a different paper stock and page size, these booklets break up the flow of photograph in a pleasing way. Yet in an otherwise large and somewhat imposing book, they also remind the viewer through their materials of the visual delicacy of most of the photographs. In addition, an appendix offers more visual material.

If art is about interrupting the certainty of our thoughts, then this book succeeds brilliantly. With Barbara Bosworth’s camera not attempting to reproduce the sky faithfully but instead conveying the sense of wonder we all feel, there is much to be enjoyed here. A lavish production, The Heavens begs for its inclusion in the collection of anyone eager to appreciate what the photobook can do.