The solitary wanderer, perched up high, overlooking the land in front of her or him, in awe of what s/he is confronted with – the sublime: photography does this just as well as painting. Isn’t the photograph above reminiscent of Casper David Friedrich’s Der Wanderer über dem Nebelmeer or Frau vor untergehender Sonne, with the ragged structures the man is standing on echoing those in Das Eismeer? So who says that photography, the medium so concerned with the surface, can’t speak just as forcefully about what might be happening underneath that surface, can’t speak just as forcefully about what deeply moves its maker?

That’s really why as a photographer you want to be so concerned with what is at stake in your work: if your own work doesn’t move you deeply, how is it supposed to move its intended viewers? I’m increasingly convinced that photography operates in such a way that what you put into the work you’ll eventually get back (the few – very, very rare – exceptions as always proving the case). In other words, if you have a quick idea for a project you can realize in an hour, one of those many one-liner photo projects that are currently flooding the internet, then what the viewers will get out of it is the equivalent of what you put in: a quick thrill maybe, but certainly not much more.

I often don’t read the statements photographers present alongside their projects, certainly not before looking at the pictures. As I discussed earlier this year, it is important for photographer to be able to write about their work. At the same time the pictures should be able to carry their own weight (probably with the only exception being conceptual photography). If they do, reading the statement usually just confirms what I got right away. Or it might point me into another direction, expanding what I sensed in the work already. 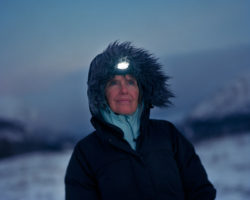 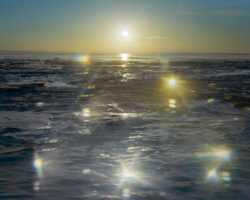 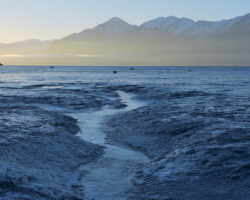 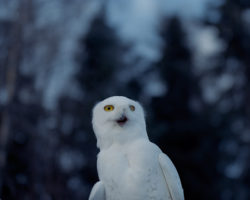 In the case of Acacia Johnson‘s Origins, I had no way of knowing that I was looking at the photographer’s engagement with her childhood home. I’m not even sure this matters to me. I am sure it matters for the photographer. And to say that it doesn’t matter to me does not in any way negate the original impetus behind the work. Instead, it merely drives home the point I just made: if you start out with something where there is a lot of stake for you, you will find fertile ground to make photographs.

But it doesn’t quite end there, as Origins shows.  These photographs clearly tap into something much bigger, something that allows me to find myself in them, even though I have never seen the landscape depicted in them in person.

Their allusions to the sublime aside, Johnson’s photographs, in particular her landscapes, are unashamedly beautiful and seductive, a most welcome fact in a day and age where the rule of the game “photography” appears to be producing work that is as clever as possible (I often think that many projects could be renamed “Why I am so clever”). Mind you, beautiful pictures might not be seductive (or vice versa) – in Origins, they’re usually both, hinting at the romanticism behind the work.

Who would have thought that in 2014 you could make very beautiful and seductive photographs that are filled with romanticism? And I will admit that I have a soft spot for romanticism, provided it is done well: when it’s not done for its own sake, but rather when it naturally emerges from the work, as it does here.

This is, after all, why I am still in thrall of photography. Not because there’s so much crap around (there is), but because there are photographers like Acacia Johnson showing me something I’ve never seen, photographed in a place like Alaska that I know very little of. I feel I can connect to these photographs in ways I would have never considered, while at the same time I am made to notice that they speak of something I am familiar with. That’s what good photographs do.