How can we talk about the lives of other people, using pictures and possibly words, in ways that does them justice and pays full attention to what matters? How do we even know what matters? How do we know that what matters for us matters for them? What if those are not entirely the same? The only position from which this can be approached is the one where you, the author, recognize that full certainty cannot be had, that full description (whatever we might mean by that) cannot be had, that a fully resolved picture (metaphorically speaking) cannot be had. There is going to be a degree of uncertainty, of not knowing, of not being able to resolve everything involved; and that’s perfectly fine.

On September 2, 2005, a young woman named Mary Cameron Robinson – her family and friends called her Cammy – died, aged 26. Young people’s hearts usually don’t just stop. This one didn’t, either. Cammy did not survive a long battle with eating disorders. From what little research I did online, the mortality rate of eating disorders is not yet fully established. The results from scientific studies vary. But you can find results like this one: “The mortality rate associated with anorexia nervosa is 12 times higher than the death rate of ALL causes of death for females 15 – 24 years old.” And: “20% of people suffering from anorexia will prematurely die from complications related to their eating disorder, including suicide and heart problems”.

Of course, by construction statistics provide a very detached view of things. As is well known, hidden behind such statistic lie the suffering and deaths of people too young to die, such as Cammy’s. Behind such statistics also lie what these deaths do to surviving family members and friends. And it’s not just the death. Even if your daughter or son does not die, the burden placed on families by eating disorders is immense. How do the families and friends deal with such a death? How did Cammy’s family and friends do it?

attempts to find out. The book lays out Cammy’s life and death in utterly distressing detail. It’s all there, photographs of family members and friends, of houses, locations and countless objects. And there are the reproductions of documents, such as letters, diaries, agenda books, medical records, even the death certificate. In addition, Abril talked to many of the family members and friends, and you can read what they told her. 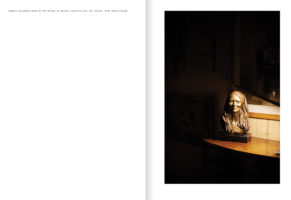 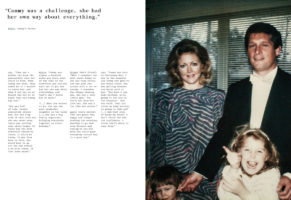 If the viewer of all of this at some stage might feel overwhelmed and literally distressed (this author did), it is important to realize that those feelings inevitably will pale in comparison to what Cammy and her family and friends went through. I want to think that it good to keep this in mind. That said, the moment you realize that you’re made to feel something, someone – the author – has done a good job.

Part of the reason why The Epilogue works so well is because it acknowledges the restrictions of the two media it intermixes – pictures and words. It has them work with each other, having them support each other. Pictures can show only so many things – they can’t get underneath the surface easily. Words, in contrast, can only express so many things – reading about someone’s feelings is not the same as seeing those feelings expressed in their face.

The book does work even if the viewer does not read the text. But obviously, reading the text opens up additional elements.

An editorial approach – so common for these kinds of topics – is entirely absent. Inevitably, the viewer will bring ideas and expectations to the table. But those are being disarmed smartly. The various cliches that make so much of editorial photography often hard to watch are absent, as are the various cliches (“redemption,” “hope,” etc.) that these kinds of stories appear to attract.

I’d like to think that the absence of those cliches does the story, and this means Cammy, justice. After all, the telling of the story is done for our benefit. But it shouldn’t necessarily be done to leave us feel good about ourselves and/or how we look at the world. Our cages should be thoroughly rattled, and the book does just that.

There are many different ways in which this is done, and I don’t want to talk about all of them. But when the book ended with Cammy’s death – of course, I knew from having seen a short notice in the local newspaper, reproduced early on – I was still incredibly shocked. I don’t think I’ve ever experienced such a powerful ending for a photobook. 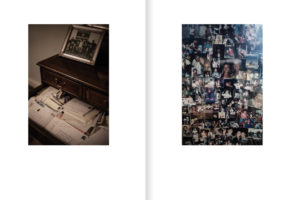 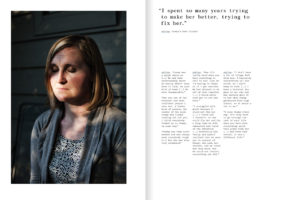 The Epilogue achieves this by getting its readers emotionally invested. You’d have to have a heart of stone not to experience this. While the reader learns early on that the protagonist is going to die, s/he becomes more and more attached, she is going to made suffer along with the family and friends whose struggle trying to save Cammy is laid out in much detail. And then it all ends.

There is no shortage of photobooks now that employ the strategies used in The Epilogue. For example, a few years ago, Christian Patterson’s Redheaded Peckerwood was all the rage, with its combination of various types of photographs and reproductions of ephemera. If that book set the bar for photobooks quite high, The Epilogue not only passes it easily, it lifts it even higher. As much as I enjoy Redheaded Peckerwood, the element of deliberate construction, of careful attention being paid to the right detail at the right time, is never that far. You can almost see it – along with what is in the book.

In contrast, Abril’s book, while constructed as carefully, never had me think of that. Maybe a good way to talk about this would be to say that in Redheaded Peckerwood, the story is told for effect; in The Epilogue, it is told for the sake of the story. And this matters greatly to me.

In all these various ways, The Epilogue thus is a masterpiece of a photobook, which brings together the best of various aspects one could hope to see more of in photography: compassion and empathy, a deep passion for an important subject matter, and a strong desire to tell a story in the best possible way.