Hye-Ryoung Min’s Channel 247 was picked by Robert Lyons as one of the winners of the Conscientious Portfolio Competition 2012. He wrote “I first got it down to five different portfolios. But I kept coming back to Hye-Ryoung Min’s, whose work struck me the first time I looked at it, and it has only grown since. The images really suggest time beyond the moment of the picture. They are well composed, and each image suggests an interesting situation. The formal aspects seem to hold the group together. Although at first one feels as if these are ‘surveillance’ images – at least by the framing, and by things that obscure the images – one quickly is able to see how they are much more.” I spoke with Hye-Ryoung Min about the work. Find our conversation below.

Hye-Ryoung Min: Communication or interaction between the photographer and the subject. By this I don’t necessary mean actual communication between two human beings. What your subject is doesn’t really matter. It could be landscape, a model, a family, or a stranger. This invisible or inaudible communication can take many forms: passion, love, curiosity, admiration, sympathy. In other cases discomfort and unfamiliarity could work better and result in making original and fresh images.

No matter what type of photography, I can tell if the photographer shared any thoughts or emotion when she/he clicked the shutter. On the other hand, if the photographer just photographed because the landscape was beautiful or somewhat different than others, then the images won’t move anybody deeply or be long remembered.

There are elements of curiosity, voyeurism and surveillance in Channel 247, which makes for an interesting mix. I suspect different people will probably come to different conclusions about the relative mix. I’m curious about your own personal mix.

My mix contains all the elements that you listed. It started with a simple curiosity of mind, kept on going with voyeurism, and the way I made this project is certainly a form of surveillance.

Channel 247 began with just looking outside of my windows, which were situated directly opposite our dining table. I treated the windows as my TV. The three windows in the living room had the most interesting and varied shows and actors, since they give out on the main boulevard with its constant flow of people and situations. However, I also enjoyed the daily shows from the windows in the bedroom, which looked out onto the backyard and featured a more regular cast of actors and private moments. Before I knew it, I was completely addicted and tuned into Channel 247 day by day and for several months. I got curious about what was going to happen next day and wanted to know about the neighbors just by looking at them from the distance. Although for the most part, it was all silent film and the story lines were pretty much repetitive, I started noticing subtle nuances and differences from one day to another. Repetition helped me understand the basic characters in the neighborhood while nuance and difference offered me clues into their hidden stories.

Sometimes the channel had special seasonal broadcasts such as J’Ouvert, the West Indian American Day Parade at 4 o’clock in the morning, Mister Softy’s ice-cream truck during the summer, or middle-of-the-night backyard parties where illegal tattoo services were offered to ex-convicts who were full of confidence, laughter and loud cursing. On that occasion, I had to be more careful not to be caught as I stood near the window. 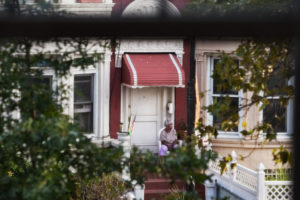 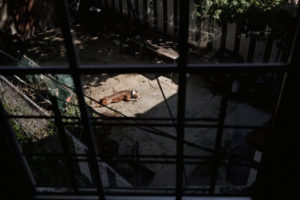 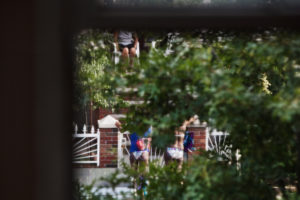 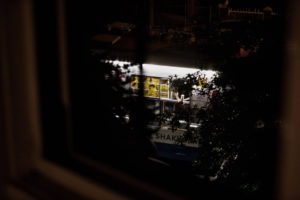 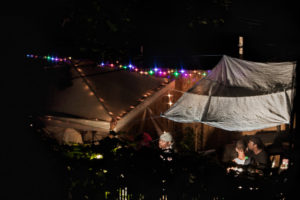 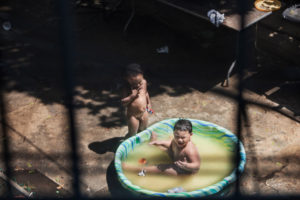 The reason that I chose to photograph when people were not aware of the camera was to avoid affecting their behavior. There are moments when people are oblivious of others, or simply don’t want to be mindful of anybody other than themselves. These moments happen between things, such as when we are rushing out to work in the morning, taking out the garbage, coming back from the deli with ready-made food, or maybe just sitting on a stoop daydreaming. Since I started watching people that I didn’t know anything about — name, sentimental relationships, occupation, age, personal history — I have noticed that those moments can be more revealing of their personalities than when they are trying to make a good impression on others. This interesting journey that started with pure curiosity ended with great discovery for me.

I thought you might be interested in the story that I wrote in my artist statements: In my teens, I couldn’t help but think that somebody was watching me all the time so I had to act as a main actress in some kind of movie which made me feel self-conscious wherever I went. This might be typical of many other teenagers and it might even play a part in how one creates a sense of self. I remember when the movie The Truman Show came out in 1998. It opens with the question: “What if you were watched every moment of your life?” It completely matched my imagination. The movie went on to show how Truman would really feel after he realized the truth of his condition. The Truman Show brought to an end my life on an imaginary movie set. Which leads me to ask: how different is our behavior when we are conscious of others around us? And what do involuntary actions tell or reveal about us?

There is that question of surveillance, though. When surveillance cameras are used by the government, say, many people get upset. They mind being watched. It’s one thing to see someone from your window, but it seems another thing to photograph them — without their knowledge and consent. How do you deal with this aspect of the work?

On the one hand, as an outsider, I was naturally curious to observe my neighbors. For various reasons, I was not in a position to interact with them more directly. In an effort to get to know them better, I found myself looking at them as they went about their daily routines. 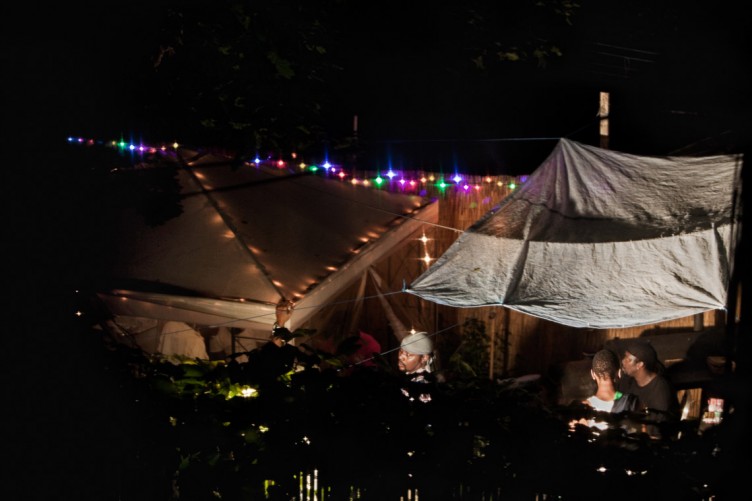 On the other, I had a legitimate reason for engaging in what might properly be described as surveillance. The ex-convicts who hosted parties in the back lots adjacent to our apartment gave me reason for concern. They were notorious troublemakers on our street and even the police was reluctant to intervene in their activities. This was a darker side of life in my neighborhood and opens other avenues in which to consider the meaning of the images.

Besides its content, Channel 247 centers on photographic framing and it carries various references from the history of photography. Can you tell me a little bit how you approached photographing what almost looks like the stage of life outside your window? Did you wait for things to happen, possibly with your camera in hand, sitting next to the window?

As I mentioned I had a dinning table facing the windows. I always love looking out windows in cafes, airplanes, home or the studio and remain a third person as I observe the world outside. For me that is a lot more exciting and attractive than any TV shows. It allows me infinite freedom of imagination and the ability to conjure up whole new worlds regardless of what may or may not be the truth of things.

For this project I always had my camera on the table with telephoto lens on. I came out to my studio space where the table was in the morning and started the day with breakfast as well as photographing. During the day if anything happened, the camera was right there — always ready — and if I saw or heard something interesting outside, I could just grab my camera, walk around and photograph. However, there were many things which happened routinely, on every single morning and this gave me a chance to reshoot or try a different approach. So I would wait and wait for these reruns.

The challenging part of this project was that I was the one who actually had a set of limitations to work with: transforming a scene from daily life into an aesthetic photograph. I sometimes had to move around from the first window to the third window and used the window frames to eliminate the elements in the landscape which I didn’t need and make it feel more like looking at a TV screen. But once my subject slips out of the frame, the show is over.

As a photographer, you juggle commercial and fine-art photography. How do you go about that? Do you find it difficult keeping things apart? (or maybe you don’t even want to keep them apart?)

It is certainly not easy, and there are conflicts between them. I treat them both as my work -that is they both require many of the same things from me such as creativity, ideas, hard work — but they have different cycles, goals, and approaches. One of the big differences is that commercial work is a result of team work and fine art is a struggle with myself. For my own projects, I ask myself and I have to find an answer. It comes from me, it affects me, it changes me, it comes back to me, and it is me.

I am an artist, and my priority is fine art. However, when I do commercial work I can take a break from being by myself. It helps support me financially and teaches me how to communicate and work with other talented people. I love when things work out very well with many people coming together as a team. It almost feels like a magic. On the other hand, I can always go back to the tiny room that only fits myself and do my own work. In a way, I am lucky that I can go in and out of the two worlds as I choose.