“This book is a the record of my life.” writes Danny Lyon in The Seventh Dog

. “I have decided to start at the end of my life, and proceed backwards […] Everything depicted here happened, usually to me or close enough for me to picture it. I do not lie about fishing, and I do not lie in my work. In my youth I was drawn to photojournalism, and it is in the nature of journalism to be truthful. More to the point, I do not have to lie or exaggerate.” OK, then. (all quotes in this article from the book)

I don’t think I buy some of that, for a variety of reasons. Life just doesn’t work that way. You don’t look back, closer to its end to its beginning, to present your own life unembellished and truthfully. Because you just can’t. It’s impossible. Even if you tried to look back truthfully to what you remember, to what you can infer from all the stuff you have accumulated, there’s still your own memory, which is more like a carefully curated collection of things that might or not be facts than a set of files in a disinterested drawer.

But given a photographer’s work is essentially the result of all of her or his idiosyncrasies, I’m going to accept Lyon’s premise. I’ll admit: I am more interested in his than the actual truth, whatever that actual truth might be. Lyon’s version of events contains life in a way that the files, if we were to imagine we could access them in some other dimension, do not. Lyon’s version of events – that’s a human voice, and only human voices can tell stories. 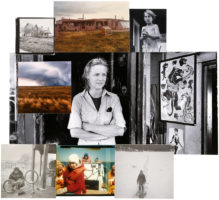 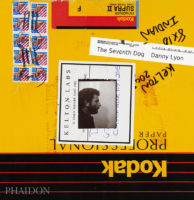 “My name is Daniel Joseph Lyon. I was born in Brooklyn, and raised in Queens, like the Ramones.”

So there’s that human voice in The Seventh Dog, and there are the pictures, many of them well-known, others not so much. But there are also all kinds of other materials on display, including photomontages and reproductions of letters or other print materials. It’s a very attractive package, the kind of packaging I wish more books about photographers would follow. I like seeing these materials, combined with that voice.

“There was a shooting and robbery in the building, a car exploded outside while I was talking to an editor of Polaroid (she wanted to leave), and baby Noah found a bag of white heroin beneath the rubber mats under the jungle gym in the park.” 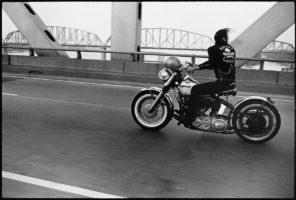 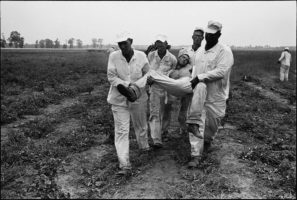 Lyon’s well-known bodies of work are properly represented, with insight into how they were made. There’s the work from the Texas Department of Corrections in 1968, which would result in Conversations with the Dead (1971). And there’s The Bikeriders, of course, shot in 1964-66.

“This, my first book, was dumped on the market along with all of my early work, sold for nothing to open up space on the shelves in the warehouse.”

And it goes back and back in time, there’s a mirror “selfie” of a very young Danny, and finally there’s a picture of weeds reflected in a pond. It’s only appropriate to leave the final words to the photographer as well…

“All that time, all those pictures, so many roads traveled down, and looking for what? What was I looking for? A child camper’s heart still beats strong, at the croak of frogs, the stillness of the water, the mirror of the weeds, each bent, each double, like his life.”